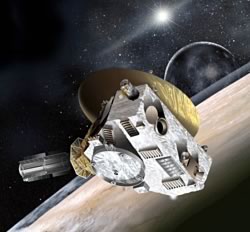 In 2006, NASA dispatched an ambassador to the planetary frontier. The New Horizons spacecraft is now halfway between Earth and Pluto, on approach for a dramatic flight past the icy planet and its moons in July 2015. VPT is powering the Cosmic Dust Experiment (CDE) on this mission. It is performing well as it collects data on cosmic dust in the solar system on the way to Pluto. After 10 years and more than 3 billion miles, on a historic voyage that has already taken it over the storms and around the moons of Jupiter, New Horizons will shed light on new kinds of worlds we’ve only just discovered on the outskirts of the solar system.Check in on the current status of New Horizons.