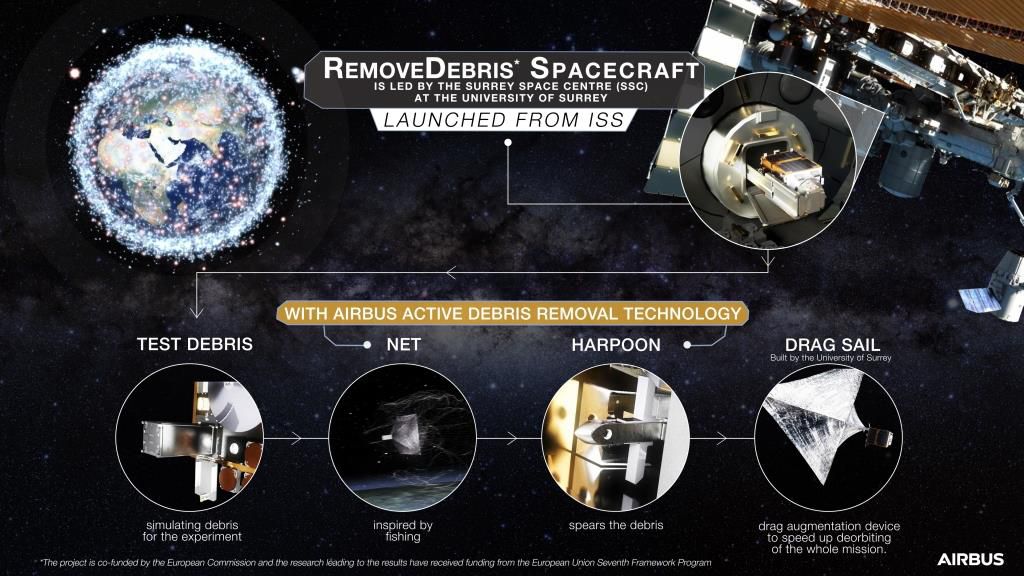 June 25, 2018 — The first satellite with space debris-removal capabilities was launched from the International Space Station last week.  The RemoveDEBRIS satellite is equipped with multiple methods to capture and deorbit space debris, which has amassed to over 6,800 tons in low earth orbit.

Currently, over 18,000 objects are in orbit, but only 1,100 of them are working spacecraft. In the past, these objects have collided with and damaged important space equipment. Because new debris is created with each collision, the likelihood of future collisions increases. With an estimated 750,000 pieces of debris already floating in space, active space mission equipment is at risk of collision damage. The mission of RemoveDEBRIS is to help solve this problem.

RemoveDEBRIS was launched into space in April aboard a Falcon 9 rocket, where it later arrived at the ISS.  Now that it has been deployed, it will begin its mission, with the initial phases to include testing the pair of CubeSats that are on board.  The first, called DebrisSat 1, has an inflatable balloon that RemoveDEBRIS will attempt to capture with a net, testing its debris-capturing capabilities. Once this is complete the second CubeSat, DebrisSat 2 (DS2), will be deployed and use its Vision-Based Navigation (VBN) system to track DS2’s movement after it has been released.

After these tests, RemoveDEBRIS will test its harpoon by attempting to penetrate and reel in a target that will extend from its frame.  Finally, the spacecraft will release its inflatable drag sail, which will essentially work as an airbrake to help the spacecraft deorbit safely. The sail will slow the satellite down enough to speed up its reentry to the Earth’s atmosphere, where it will burn up.

With parts on board, VPT is proud to be a part of this vital mission to help remove hazardous space debris and look forward to watching this and future related missions unfold.

For more information about this mission, we recommend you watch this video.