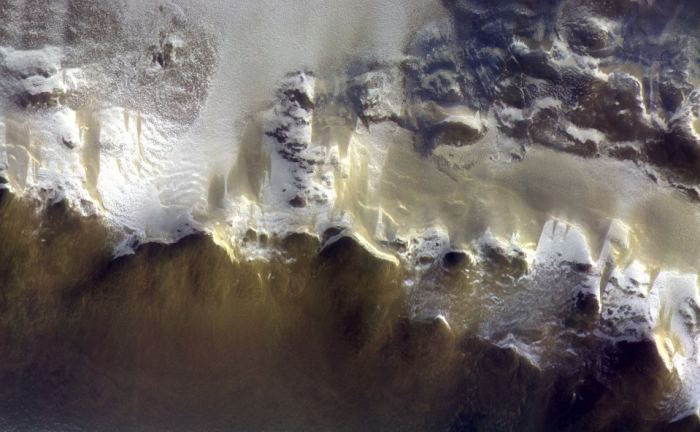 May 3, 2018 — The European Space Agency’s (ESA) ExoMars Trace Gas Orbiter (TGO) has released its first images from Mars which were captured during its mission test phase. The Colour and Stereo Surface Imaging System (CaSSIS), one of the instruments aboard the TGO, recently captured its first image of the Martian surface.  The remarkable image – which is a composite of three separate images taken simultaneously — shows a 25-mile long, six-mile wide portion of the Korolev Crater located in the northern hemisphere of the planet.

The Trace Gas Orbiter was launched in March 2016 as part of the first stage of the ExoMars program with the intent to study and detect trace amounts of gases in the Martian atmosphere. This information could help determine if there has ever been life on Mars. On October 19, 2016, the TGO achieved orbit around Mars, and recently established a near-circular orbit after performing several braking maneuvers, in preparation for the first leg of its mission which began April 21, 2018.

With the goal of determining the molecular composition of the planet’s environment, spectrometers aboard the TGO have begun collecting samples to observe how sunlight reflects off the molecules.  Ultimately, future images taken by CaSSIS will be analyzed to look for evidence of trace gasses on the surface.  The successful execution of these first set of images is a positive indication that CaSSIS is on the road to further mission success.

With VPT parts on board the Trace Gas Orbiter, we are proud to be a part of this mission.  We congratulate the European Space Agency on their success. Please visit ESA’s website for more information about the mission.