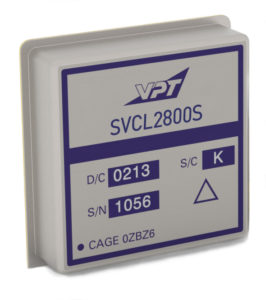 The SVCL2800S Series is operable over the full military temperature range (-55 °C to +125 °C) with no power derating. It is designed to control the inrush current drawn by VPT’s EMI filters and DC-DC converters during turn on. It functions by limiting the rate of rise of its output voltage and also controls the inrush current of discrete input capacitors.

The series is radiation hardened and suited for use in low Earth orbit (LEO), geostationary orbit (GEO), deep space, and launch vehicle programs. It has a guaranteed TID performance to 100 krad (Si) including ELDERS and SEE performance to 85MeV/mg/cm2 and is qualified to MIL-PRF-38534 Class H and Class K.