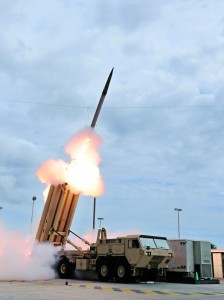 (FILES) This March 18, 2009 handout image courtesy of the US Missile Defense Agency shows the launch of the Terminal High Altitude Area Defense (THAAD) missile during a test. The United States is to deploy a THAAD missile defense battery to defend its bases on the Pacific island of Guam, the Pentagon said on April 3, 2013 following threats from North Korea. The news that the ground-based system would be in place in the coming weeks came after two Aegis anti-missile destroyers were sent to the western Pacific to intercept any North Korean strike against US or allied targets. The THAAD (Terminal High Altitude Area Defense) is a truck-mounted system that can pinpoint an enemy missile launch, track the projectile and launch an interceptor to bring it down. = RESTRICTED TO EDITORIAL USE – MANDATORY CREDIT ” AFP PHOTO / US MISSILE DEFENSE AGENCY/” – NO MARKETING NO ADVERTISING CAMPAIGNS – DISTRIBUTED AS A SERVICE TO CLIENTS =